Bob Kopski, K3NHI, and John Lawson, K5IRK, have come up with a Simple Tracking Generator (STG) to go with the QST Spectrum Analyzer that K7TAU and I presented in the August/September 1998 issue of QST.    Our original tracking generator circuit appeared in the November, 1999 QST.    We used a high level mixer for that design.   In retrospect, that was not really required.   We had generated a power of +6 dBm, but then attenuated it through a pad to reach the desired output level of 0 dBm.    A normal diode ring mixer would have done as well.   Our original design used a crystal controlled 5th overtone oscillator.   Although ideal, crystal control is not mandatory for the wide analyzer bandwidths available in our analyzer.  A more detailed block diagram is shown below.

Bob and John did several things to simplify the overall design.   First, they eliminated crystal control in the 110 MHz oscillator.   Instead, an LC circuit was used.   Their mixer was the popular NE602 (or 612) and they employed the built-in oscillator on the chip.   A trimmer capacitor sets the frequency.   A varactor diode is controlled by a front panel pot for exact adjustment.   This is necessary, for there will be some thermal drift, although it is not severe.   It is useful to use a high quality trimmer capacitor in the circuit.    Bob used a home made one in his version of the TG while John used a commercially available part.    Multiple turns for the adjustment are worthwhile.

The mixer in this analyzer is the Gilbert-Cell integral to the NE602.   This mixer works with lower levels than are normally used with diode rings, so the signal levels throughout the system are smaller.   The signal that is extracted from the SA must be attenuated before it can be used as an input to the Gilbert Cell.   The output from the NE602 is applied directly to an amplifier with a very low input impedance.   This operates like the upper transistor in a cascode connection, eliminating the attenuation characteristics of the normal NE602 output capacitance, serving to extend bandwidth.

The post mixer amplifier has a 50 Ohm output impedance that serves well to drive the low pass filter that eliminates the image component.    The SMT low pass shown below in this note is recommended.   If commercial SMT inductors cannot be found, a designer/builder could wind inductors in the threads of a machine screw.   A coil winding program to facilitate this is found in the "experiments and designs" section of this web site.   The home coils should be small and spaced at least a coil diameter or length from each other.    They should be measured before insertion in the circuit.

The amplifier topology that Bob and John used in the STG consists of a common base stage with a cascade follower.  This circuit is quite robust with excellent bandwidth.

The low pass filter drives a two stage amplifier with a 50 Ohm input impedance.    This provides enough gain to generate an output close to 0 dBm.   An exact output power value is not really needed.    The detailed schematic for the STG is shown below:

Although this tracking generator is much simpler than the original, it can still be a challenging project.   The tracking generator is much like the transmitter portion of a familiar amateur radio transceiver.   When the "receiver" portion of the system tunes, or sweeps to a new frequency, the transmitter tracks right along with it.  However, there is one major difference, one that explains the potential difficulty in the measurement project.   Unlike the usual communications transceiver, the two parts of a SA/TG pair must both operate at full performance at the same time!       Good shielding is mandatory, as is effective bypassing and decoupling.     One of the things discovered by Ed, KG4ARN (see info below) was that high quality feed through capacitors are worthwhile.    The unit that he suggested is a Spectrum Control model 1201-066.   This "bolt in the wall" pi filter is more than a mere capacitor and has a specified attenuation of 68 dB at 100 MHz.    The inexpensive parts, like some "good buys" that I got on eBay, are only specified for 45 dB or so.    Ed had measured some of the caps he was using as only offering 30 dB attenuation at 100 MHz.   The good parts mentioned are available from Mouser for about $6 each.    It may be necessary to use these parts in a couple of the VHF parts of the SA as well as in the supply line powering the tracking generator board.     A tightly shielded box is mandatory for the TG.   Good shielding is equally important for the sections of the spectrum analyzer.

Much more information on the new TG is provided by Bob and John on the EMRFD Yahoo Group in the "files" section as "K3NHI_K5IRK_STG".    Bob's analyzer is one that tunes from DC to 100 MHz with a first IF near 150 MHz.  John's is more of a carbon copy of the QST design.    John found no measurable difference between his STG and the original TG design.   But high quality feedthrough capacitors are important in both.   Many thanks to both Bob and John for their efforts to generate a great new design.

Most of the material that follows
applies to the original tracking generator.

Comments that apply to the STG are in red.

The figure below shows the changes that Ed made.   The top part of the figure (A) shows the original block diagram while the diagram below that in (B) shows the modification that Ed did.   He moved the 6 dB pad to directly follow the mixer.    This will then guarantee a reasonable termination for all high and low frequency mixer products.   The pad is followed by the low pass filter.   Ed elected to use a Mini-Circuits PLP-70 filter in this slot.   (Hey, why not.  Everything else in the TG is from Mini-Circuits.)      These details are not nearly as important with Kopski and Lawson's STG, for the Gilbert Cell mixer is not prone to the problems with termination sensitivity and signal reflection that we enjoy with diode rings.

The note I got from Ed indicated that he pulled the output directly from U3 with no pad at the output.    This is probably fine for most applications.    The available output power should be around 0 dBm.    For critical applications where it is important to have a very clean output impedance, it might be useful to include a 10 dB pad (100 Ohm parallel resistors with 68 Ohms series) in the output as I have shown the part B of the figure above.     This is up to the experimenter/builder.   The amplifiers used in the STG have well defined impedances at both input and output, without the interactions that are found in amplifiers with heavy parallel feedback.

Ed still had some anomalous behavior after the changes to the block diagram.   He finally solved the last baseline rise and related problems by placing the 110 MHz LO in a separate box with high quality feedthrough capacitors.     John Lawson had a similar experience.

Part C of the figure shows a SMT filter that should be suitable for the output of the tracking generator or for the front end of the analyzer itself.    The inductors are by JW Miller and are 1210 sized parts.    A calculated response for this circuit is shown below.

The red curve shows the response of the filter while the brown line is the response of the original low pass circuit.     The new filter is assumed to use inductors with Qu=20 while I assumed Qu=80 for the original filter.    The filter used in the spectrum analyzer and then repeated for the tracking generator was designed to use identical inductors, which is the origin of the ripple.    There are minor ripples in the new filter, which started as a 0.1 dB Chebyshev design.   The present ripples can be observed by setting Q to a very high value instead of the present 20.   The Chebyshev passband shape disappeared when the original design values were perturbed so standard values could be used.    The ripple is virtually gone in the final filter shape, a result of the loss.     The loss is not out of hand though -- it is 2.5 dB at 70 MHz, assuming Qu=20.   Note that the plots shown are obtained over a restricted 10 dB range.   This SMT design is the filter that I would recommend for use in the STG.

We encourage builders to give some SMT a try.    This low pass filter is a place where it really makes sense, for it improves the performance with lower parasitic inductance in the shunt capacitors.    The virtues of SMT go beyond component density.    It is unfortunate that so many radio amateurs approach SMT with fear, for it is not that difficult once suitable optical enhancements are in place.

I finally got around to building the SMT low pass filter in 2007.   The schematic is that shown above in part C of the figure showing KG4ARN's modifications.   (These coils are no longer available from either Mouser or Digi-Key in 2010!   Rats! )  I have built similar filters with lower Q inductors.   They work, but the filter response drops by a couple of dB near the cutoff.

This is a photo of the completed filter.  The above breadboard has two wire vias for each capacitor ground.   The capacitors are size 0805, 5% C0G manufactured by AVX.   I used SMB coaxial connectors to facilitate measurement. 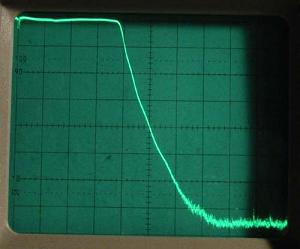 This photo shows the measured filter response.   The gentle passband loss in the simulation above is not evident, suggesting that the inductor Q may be higher than the value of 20 used with the simulation.   The vertical divisions are 10 dB per division while the horizontal is 20 MHz per division (total span of 200 MHz.)

A wider 500 MHz total span showed two response peaks above 200 MHz, both still more than 60 dB below the peak low pass response.   Modeling suggests that these come from series inductance in the chip capacitors and mutual inductance in the form of long ground leads between the capacitors.