(You will find some family URLs mixed in with the photos below.) 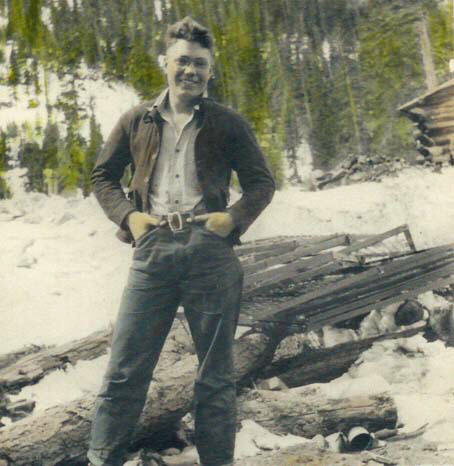 This is perhaps my favorite photo of Pop, taken in 1934 at the American Mine, near Alma, Colorado.     Photo from the Robert Hayward collection -- thanks Uncle Bob!

Den and Cheryl at the restaurant.  Would you believe the name of the place we went was the "Claim Jumper" and that's a gold pan above Den's head.

Shon and Wes at the restaurant.

My cousin Greg from Wyoming and his family visited us in late July of 2009.    Greg was sporting a new, SLR/Digital camera, so he was taking a lot of pictures.   He got an especially good one of Pop that he is sharing with us. 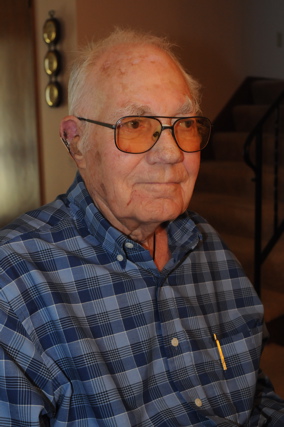 Of course, the big event for July was that the twins had their first birthday.

The twins are now 1 year old.  This is a Roger photo -- thanks Rog.

We had a family get-together here in Beaverton at the end of May.   Den, Cheryl, and Pop joined Roger and his clan for an afternoon.  Here are a couple of shots from that bash, both featuring the twins.   They had never met Den and Cheryl.

This is James with Pop.

And this is Will.    Both boys are now crawling all over the place.

We went over to Den's house on Mother's Day of 09 for a family get-together and brunch.   Lots of fun, as usual. (Den photo.)

This photo was taken at the end of February, 09, catching z's at our place.

Here's one of the boys playing with Grandma H in April, 09.  (Who knows which one?)

This is a Thanksgiving Day 2008 shot of the kids with Christmas stockings that Grandma cross stitched for the guys.  Charlotte looks on at "My Twins."

The other big event for 2008 was that Pop moved.   He is now down the street from us, here in .   As we usually do, Den and Cheryl joined us and we went out to dinner to celebrate his birthday on October 10th.

This is a view just after dinner.   That's Cheryl in back of Pop.   Then Den is in the red shirt with Shon in back of him.

Pop on his 96th birthday.

We almost always make it to the at least once per year.    One of those visits is for our anniversary in August.

We managed to get in a few other treks during 2008.   We went to for a couple of weeks in March.   Then at the end of September we took a cruise along the eastern seaboard from and north through the Maritime Provinces of Canada.   That trip ended in via the . 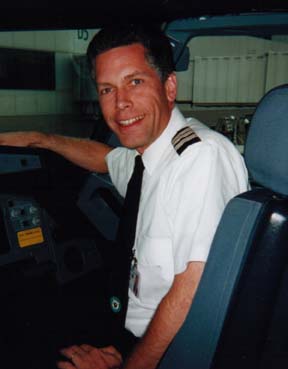 This is a shot of son Ron at work. He had a quick-turn flight into sometime in 2000, so we ran out to the airport for a quick visit and a look at the cockpit of the Air Bus.  (I suspect that this opportunity won't soon repeat in this post 9/11 era.)

Look at  the link to Ron's web page for more shots.  Ron has extensive family history information and a wonderful collection of hiking photos. See  http://www.ronhayward.net The boys have their own web sites that are listed in the links from Ron's site.

Roger's  web page is http://www.ka7exm.net/ .  Look there for some shots of the kids.